A few weeks back, a British man was publicly mortified when his two young children burst into his home office in the middle of a live on-camera interview with the BBC. It was a scenario many parents could relate to, and naturally the clip went viral. But it also sparked a larger conversation about the varying roles that men and women play in balancing their work and home lives, even generating spoofs depicting what the scene might have looked like if it had been a mother rather than a father in the interview (spoiler alert: in addition to feeding the child while answering questions on live television, she’d also be roasting a turkey, helping her husband find his sock and defusing a bomb). 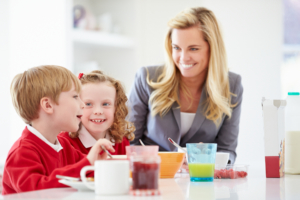 At WGLI, it sparked a lot of conversation about the phenomenon of unpaid work, which encompasses things like child care but also roasting turkeys and finding socks. And since today is No Housework Day, we thought there was no better time to put a spotlight on how heavily housework and other unpaid work weighs unevenly on women.

According to recent data from the Bureau of Labor Statistics, 84% of women report spending on average 2.4 hours every day on housework defined as cooking, cleaning, and generally taking care of the household, even amid women making up half of the labor force.

For that reason, domestic duties, more commonly referred to as “unpaid work,” have an enormous effect on women’s place in the workforce. It affects the industries and titles that women choose to pursue in their career. Perhaps more importantly, women are unfairly subjected to wage discrimination by employers who arbitrarily assume they’ll work less compared to their male counterparts, whether or not they have children. To a certain extent, this is true — if 2.4 hours of your day are already spoken for, there’s not much left for your employer. All this coalesces to powerfully impact a woman’s earning potential over her lifetime — and, by extension, the economic health of her family.

So what can we do?

Michelle Obama said it best: “If you want to support women in the workforce, be a better father, be a better husband and be a better employer.” The struggle to “have it all” is real for working mothers but it doesn’t have to be. When fathers and husbands do their part to share housework and childcare duties, women are relieved from some of the time commitments that hold them back professionally. And when she earns more, the fathers and children benefit, too.

Women can also help ourselves by negotiating for higher wages at work and asking for more help with unpaid work at home.

But the people who are in the best position to support women are employers. When employers offer women equal pay and provide benefits that support working parents (such as on-site childcare and flexible work schedules), they build a workforce that is loyal, more diverse, more passionate and more committed to stick around.

So what can we do as a society to support and empower women to reach their fullest earning potential? That’s easy — support each other.

And, today at least, do no housework.

About the Author: Shirisha Chennamaraju