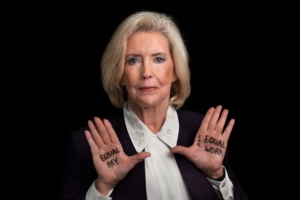 Needless to say, trailblazers are just the kind of leaders WGLI trains every day. And no one knows trailblazing better than Lilly Ledbetter. Thanks to the Fair Pay Act of 2009, the name Ledbetter is now synonymous with the idea of equal pay. But unfortunately, though she’s now an activist for equal pay, Ledbetter never got equal pay for herself.

Ledbetter grew up in Alabama and was employed for 19 years at Goodyear Tire, occupying a variety of roles from administrative to managerial. Her leadership role meant she was often the only woman on the factory floor. But one day, after nearly two decades of service to Goodyear, Ledbetter received an anonymous letter notifying her that of her 15 male counterparts, she received the lowest pay — even in instances where she had more seniority.

So she sued. After a series of wins and reversals, Ledbetter took her case all the way to the Supreme Court. But the Court ruled against her, citing a legal requirement that she file her suit within 180 days of her first discriminatory paycheck — even though she wasn’t aware of the discrimination at the time. This ridiculous verdict is what catapulted Ledbetter into gender-pay activism.

Ledbetter became a pioneer to make real change for women in the workforce. As a result of her efforts, Congress passed the Lilly Ledbetter Fair Pay Act in 2008, which was signed into law on January 29, 2009.

The Ledbetter Act amends the Civil Rights Act of 1964 by stating that the 180-day statute of limitations for filing equal-pay lawsuits resets with each new paycheck. Even though she has never received financial restitution from her former employer, Ledbetter now says that she’d be happy “if the last thing they say about me after I die is that I made a difference.”

Ledbetter undoubtedly did make a difference, but today, after the 8th anniversary of the act that bears her name, she is still fighting for more change. Women in the workforce continue to battle pay discrimination, earning on average 79 cents to every male employee’s dollar  — or as little as 60 cents for African-American women and 55 cents for Latina women. Ledbetter remains committed to closing the pay gap, and so is WGLI.

Here are four things you can do about the pay gap.

About the Author: Shirisha Chennamaraju